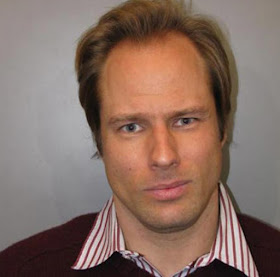 A scene in the forthcoming Twentieth Century Fox movie The Predator featuring former Days of our Lives star Steven Wilder Striegel was cut after the studio learned he is Connecticut’s sex offender registry.

The studio's move, first reported by the Los Angeles Times, occurred immediately after it learned of the actor's background.

Striegel was arrested by Newtown police in August 2009 on charges of engaging in an inappropriate internet relationship with a 14-year-old girl. Age 38 at the time, he was living in New York while the girl was living in Newtown.

He was convicted in May 2010 of two felonies, risk of injury to a minor and enticing a minor by computer. He was sentenced in August 2010 to 10 years in prison, suspended after he served six months in jail, and three years of probation.

Striegel is a longtime friend of the film’s director, Shane Black, and was featured in a short scene with actress Olivia Munn, the Times reported. Munn notified studio officials after learning Striegel was a registered sex offender.

“Our studio was not aware of Mr. Striegel’s background when he was hired,” the studio said in a statement to The Times. “We were not aware of his background during the casting process due to legal limitations that impede studios from running background checks on actors.”

These @latimes excerpts from the arrest affidavit are beyond disturbing and completely contradict Wilder’s version of how he was convicted. https://t.co/QZcGxV7JU9
— om (@oliviamunn) September 6, 2018

Black, the movie’s director, did know about Striegel’s backgound, the newspaper reported. “I personally chose to help a friend,” he told the newspaper.

Striegel’s lawyer in the Connecticut case, Eugene Riccio of Bridgeport, said people convicted of crimes should be able to get on with their lives.

“Mr. Striegel has long since paid his debt to society and deserves the opportunity to make a living,” he said.

Striegel, in emails with a Times reporter, described the 14-year-old girl as a distant relative he’s spoken to at family gatherings.

He told The Times that he had tried to boost the teen’s self-esteem and “made the very bad judgment calls of telling her in these emails that she was attractive, and sexy, and not a failure, etc.” He said he told her they could not have a relationship because of her age and because they were related.

The warrant for Striegel’s arrest, which the newspaper obtained, alleged physical contact on several occasions, including kissing, touching the teen’s breast over her clothing, rubbing her legs and stroking her neck. Striegel told The Times those allegations were not true.

According to the warrant, in one email message Striegel told the girl that there was no one in the world he would rather have sex with. “I will be VERY honest: There’s no question that it’s you. None. Hope that doesn’t totally freak you out, and just because it’s what I want, and what you want, doesn’t mean it’s the right thing.”

In other correspondence, The Times reported, he graphically described his sexual preferences, his preferred sexual position and grooming practices.

“EVERY thing you say turns me on!!” he wrote to the teen, according to the report. “I love that it rocked you when I pulled your hair that time.”

The teen’s father discovered the emails she and Striegel exchanged and told her to have no more contact with Striegel.

Striegel was known simply as Steve Wilder when he starred on Days of our Lives as Jack Deveraux in 1997-1998 and Melrose Place as Alex Bastian. He famously made his first Days appearance in 1997 during a shower scene which started with Mark Valley in the role. By the time the shower ended, Wilder was the new Jack.

UPDATE:
On Saturday, Munn spoke to The Hollywood Reporter about how she didn’t feel supported by the rest of the cast after criticizing the film’s director for casting his friend, actor Steven Wilder Striegel, in the movie, despite the fact that Striegel is a registered sex offender.

“It’s not an easy thing to be the one to speak up. There are people who get mad at you for not helping them bury it,” she shared during the interview, which was conducted at the Toronto International Film Festival, where the movie had its world premiere. “It’s a very lonely feeling to be sitting here by myself when I should be sitting here with the rest of the cast.”

Shortly after the outlet posted a link to the video on their Twitter account, Emmy winner Sterling K. Brown apologized to Munn before adding his voice to the conversation.

“I’m sorry you’re feeling so isolated, my dear,” he wrote in the first of a series of Twitter messages. “And I’m sorry you’ve been the only one to speak up publicly.”

The This Is Us star, who did not attend the film festival, went on to share that “there are two main issues as far as I see it. First, what is and is not forgivable?”

“That’s gonna vary from individual to individual,” he wrote, adding that Munn and the film’s director, Shane Black “may differ when it comes to that issue.”

“I don’t have all the details regarding his friend’s crime, but I know it involves a minor, and he spent time in jail. With regards to forgiveness, I leave that the individual,” the actor continued, adding that “what I take issue with…is that we all have the right to know who we’re working with!”

“When someone has been convicted of a crime of a sexual nature involving a child, we have the right to say that’s not okay!” he remarked. “Our studio was not given that opportunity, and neither was our cast. Especially @oliviamunn who was the only member of the principal cast who had to work with him.”

The actor went on to make it clear how much he appreciated the fact that she did speak up, instead of ignoring the truth.

“I so appreciate that you ‘didn’t leave well enough alone,’ & again, I’m so sorry you feel isolated in taking action,” he wrote. “Thank you to @20thcenturyfox for taking quick action in deleting the scene. @Oliviamunn I hope you don’t feel quite so alone. You did the right thing.”

Brown brilliantly plays Randall Pearson on This Is Us, which kicks off Season 3 on September 25.
Roger Newcomb
Share