Daytime Emmys to be Live-Streamed on Facebook, Presenters Revealed 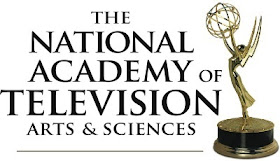 Some of the biggest and brightest stars of daytime television are scheduled to present at the 44th Annual Daytime Creative Arts Emmy® Awards on Friday, April 28th, 2017 and the Daytime Emmy® Awards on Sunday, April 30th, 2017 at the historic Pasadena Civic Auditorium located in Pasadena, Southern California. In addition, The National Academy of Television Arts & Sciences (NATAS) announced that the Sunday, April 30th show will be live-streamed on both Facebook Live and Twitter-Periscope Producer beginning at 8 p.m. EDT and 5 p.m. PDT. Please refer to our Facebook and Twitter accounts for more information:

“The National Academy is thrilled to be streaming this year's Daytime Emmy Awards to the world,” said Bob Mauro, President, NATAS. “Add the great list of presenters we have for both our signature shows and I think the fans and Daytime community are in for a real treat!”

“I am over-the-moon to be able to bring the Daytime Emmy Awards to all our fans,” said David Michaels, SVP, Daytime. “With Mario Lopez and Sheryl Underwood as our hosts and so many wonderful presenters, it's going to be a great evening for Daytime!”

Special musical performance by Max Ehrich (The Young & the Restless, Under the Dome). Additional appearances by Karla Mosley, Reign Edwards and Jacob Young (The Bold and the Beautiful), Sonya Eddie and Robert Palmer Watkins (General Hospital), Nadia Bjorlin and Eric Martsoff (Days of our Lives) and Tristan Lake Leabu (The Young and the Restless). Music provided by Caleb Nelson and The Remotes.

The 44th Annual Daytime Emmy Awards will recognize outstanding achievement in all fields of daytime television production and are presented to individuals and programs broadcast during the 2016 calendar year.

United Airlines is the official airline of the Daytime Emmy Awards and The National Academy of Television Arts & Sciences.
Roger Newcomb
Share